I sit here on the eve of the anniversary of your passing. You left us the day before my birthday. April 13 was destined to forever be a day of sad memory and less one of celebration. Then, two years later, your grandson, Logan, was born on the 14th of the same month. As providence would have it, the quieting of your time here and the grief that came with it was redeemed with the joy of his arrival, and Chelsea’s only weeks before.

I am only seven years shy of the age you were when you left us and jetted to the ultimate TDY. Not one of these years has passed without a thought of you; who you were, what you stood for, what you wanted to be, and what you hoped for me—or at least what I imagined you hoped for me.

You saw too many things we shouldn’t see. The emotional flak that seemed to burst relentlessly all around you for so many years took its toll and fed the cynic that was sure to mount after seeing all that you saw in defense of us.

As a patriotic teen, seated tightly in a turret, you shot guns that put men down from the sky. Later, as a pilot, you airlifted boys and dropped them over badlands. Many would never again see their mothers and fathers and sisters and brothers and girls whose letters inspired them to live. You flew secretly in places we didn’t acknowledge. You served—even when the motive wasn’t clear, but the mission was never questioned. You attended ceremonies and wrote letters than no one should have to write and heard the macabre sound of twenty-one gun salutes too many times.

An army of dying cells would declare war on your decorated being. You and and your own squadron of medicine men and gadgets and chemicals fought and then surrendered. In those last days you became a child again. Curious and wondrous. Grateful and regretful. Kind and spiritual.

You greeted your beautiful granddaughter on the day of her birth, in my own hospital, and held her and spoke to her in your broken, but quietly clear voice with the words, “You be a good girl. I love you.” You kissed her forehead and let the next days be your last. Reconciled. Finding fragments of peace in this world of wars.

Logan has grown and has followed you. He graduated college a healer. He bypassed the prestige of OCS and enlisted with plans and a vision of the highest honor to be among the ranks of the most prestigious of fighting men. He has become that man. His legacy of defending this beautiful land is in the best hands.

Chelsea, the little girl held in your arms only days before you left us, fights for those who can’t fight. She listens empathically to stories that wage war in the minds of precious kids and young adults. She combines her learning and her intuition and offers hope through diagnosis, treatment, a kind touch, and words, and prayer.

I woke at the earliest hour. I remembered our time. Tonight I will sit on my deck and quietly meditate on the last days that were good, and too few. I will hold the letter in my hands that you wrote for my first birthday. You wrote it to me from one of those secret places in southeast Asia that would later become an awful killing ground. It never left you. I will think of how Chelsea and Logan inherited some of your spirit when your body resigned. And I will be forever grateful that the years and years of not knowing you 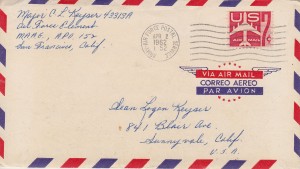 , of misunderstanding you, of unrequited pride would evaporate in a matter of those last months. Replaced by a round of golf, talks about a good book, revisiting and conquering regrets, and, finally, a gentle goodbye.

I will celebrate my own birth and stand grateful that you and mom chose to bring me in later in your lives (or at least that is the story you stuck to). I will celebrate Logan’s day the day after mine. We will salute you in our own traditional and civilian and loving way.

“The birds will keep us in touch”